‘Today, during the Xbox E3 2017 briefing, we unveiled that the best-selling racing franchise of this console generation is back with a premiere Project Scorpio experience, Forza Motorsport 7, and in continued collaboration with Porsche, debuted the Porsche 2018 911 GT2 RS as the cover car.

Forza always brings the best and most exclusive new cars to our fans, and we’re honored to present this stunning upcoming high-performance 911 GT car in time for our new title.

This moment is a testament to digital and real-world racing merging in an unprecedented way. E3 attendees will be the first to drive the most powerful 911 for the road ever in Forza Motorsport 7 on Xbox One X, the most powerful console ever.’ 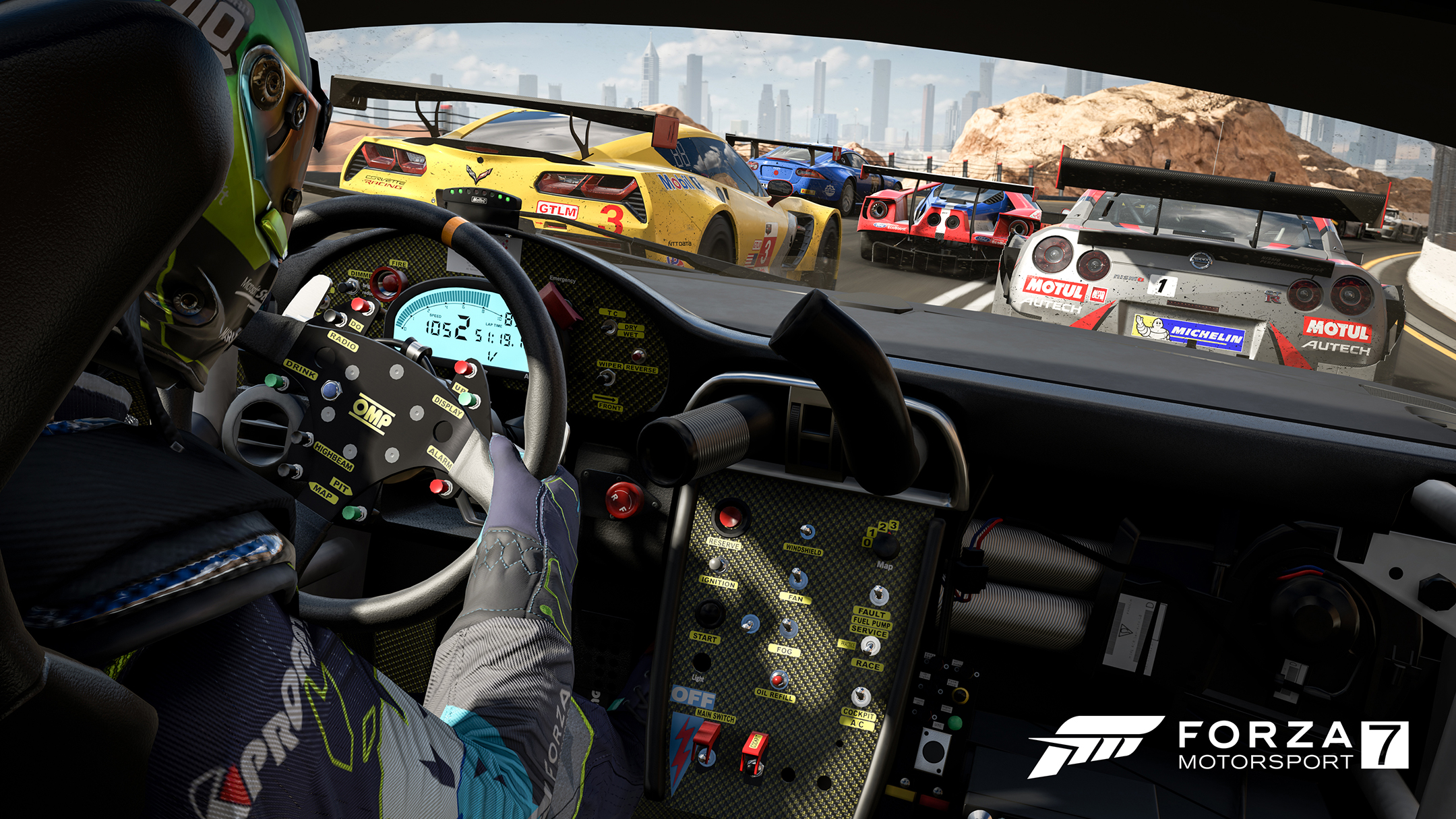 Turn 10 is offering 700 cars at launch, nearly lapping the 450 from Forza Motorsport 6 — and that includes the return of Porsche. There are 30 tracks (or locations) with more than 200 different configurations for players to run. 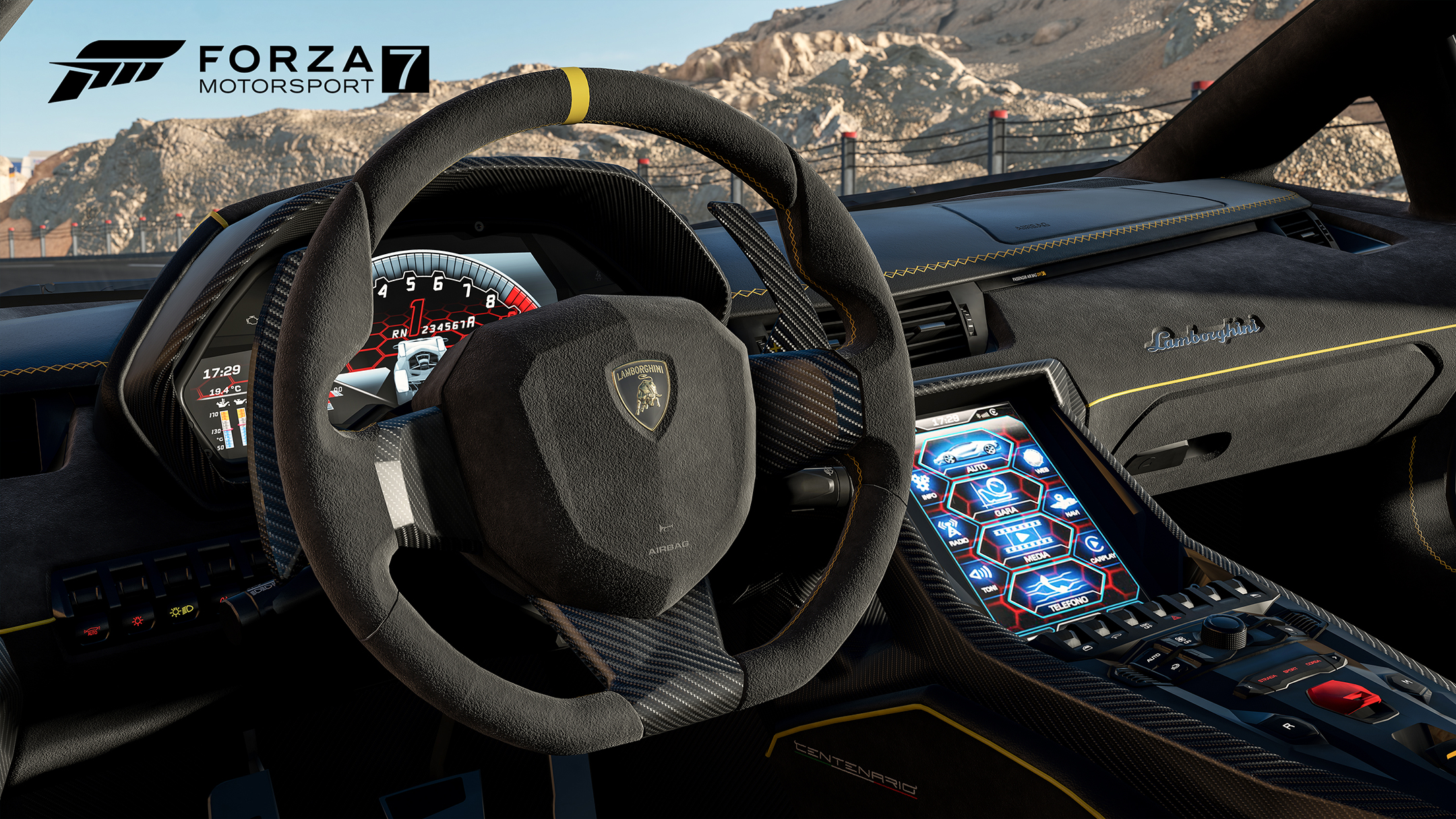 Forza Motorsport 7 features more than 700 ForzaVista cars to collect, race and customize and 30 racing environments with more than 200 ribbons. Plus, Forza Motorsport 7 offers more Porsche models than any racing game and an unparalleled portfolio of car manufacturers, including every premium brand. And for the first time in Forza’s history, players can personalize their appearance with a massive race gear collection that includes hundreds of options spanning decades of race history and pop culture. – Team Turn 10 Studios 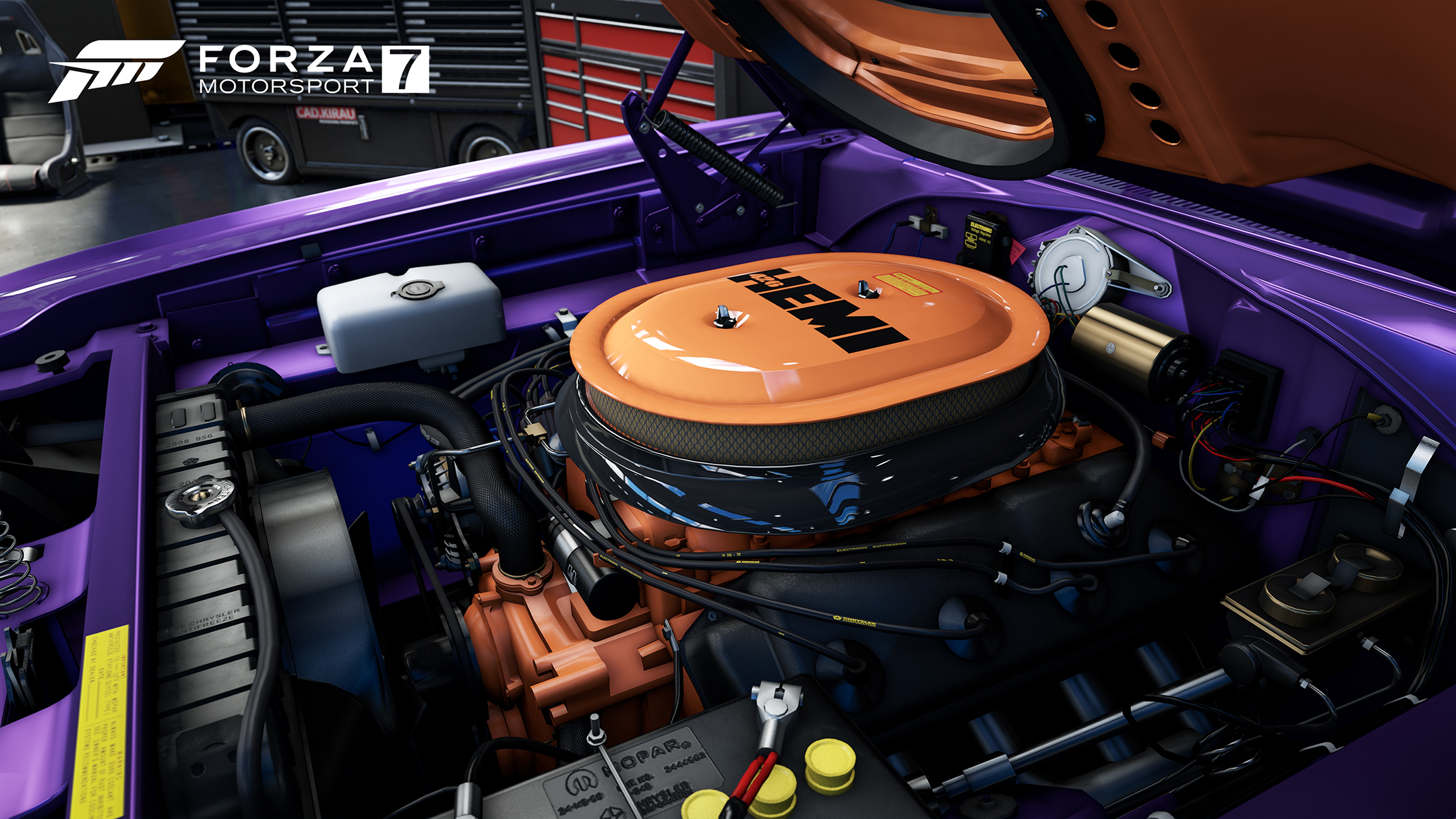 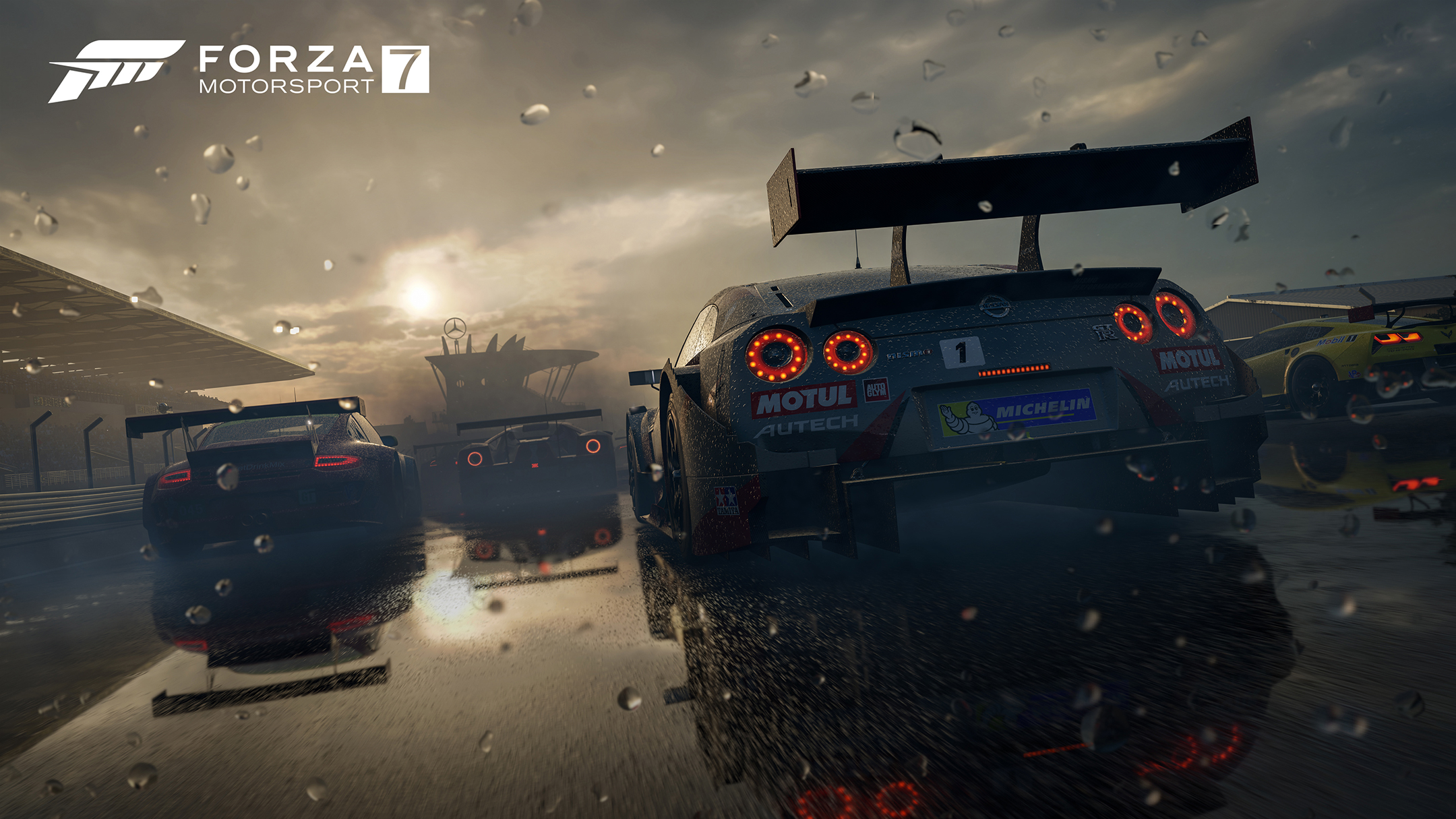 The weather and night modes that were added in Forza 6 are no longer just modes: there’s a fully dynamic weather system that changes with every race, sometimes even during the race. You can see the horizon shimmer in the distance on hot tracks. The puddles now change in real time when it pours, and on some tracks you can see the rain approaching off in the distance.

Watch a Nissan GT-R race in Nürburgring in this gameplay video from Forza 7 captured off Microsoft’s Project Scorpio. Video via Team The Verge

‘Forza 7 wouldn’t be this far along if it wasn’t for the partnership Turn 10 started a few years ago with UK-based Playground Studios, which makes the more arcade-style Forza Horizon series using the same Forza Tech game engine that Motorsport is built on. By staggering the release of Horizon in the years where there is no Motorsport, the teams are able to share knowledge and accelerate the pace of development.’

“We can actually share those features back and forth between the titles, and it means both of them can become better with each release, more than they would if they were being developed in isolation” – Chris Tector, team software architect

It’s this approach that carved out room to add features like dynamic weather and an entirely new character component, Dan Greenawalt explains, while also dramatically increasing the number of cars and tracks — all as the team preps the game engine to run in 4K.

“You go, hey, I’ve got this great team that can build anything. Let’s not have them build everything. It allows that big team, instead of trying to just boil the ocean and do everything, they focus all that innovation in one place and can go in incredible areas.” – Dan Greenawalt, Forza franchise Creative Director

The other big piece to getting Forza 7 ahead of schedule, though, is that Turn 10 has been developing the new game alongside Project Scorpio since the beginning. For a while, Turn 10 used simulations of the Scorpio hardware. Eventually, though, it came time to fire up the game on the real thing.

“I was coming back from lunch and Chris (Tector) came over, and he was vibrating,” Alan Hartman, the studio head for Turn 10. “He was like, ‘we’re running on Scorpio, you want to see it?’” Hartman followed him over to a conference room that had its windows blacked out. “I come in and I see the fan pointed at the circuit board and the ribbon cables strung out and brought around to the monitor. And sure enough, there we are, running.” 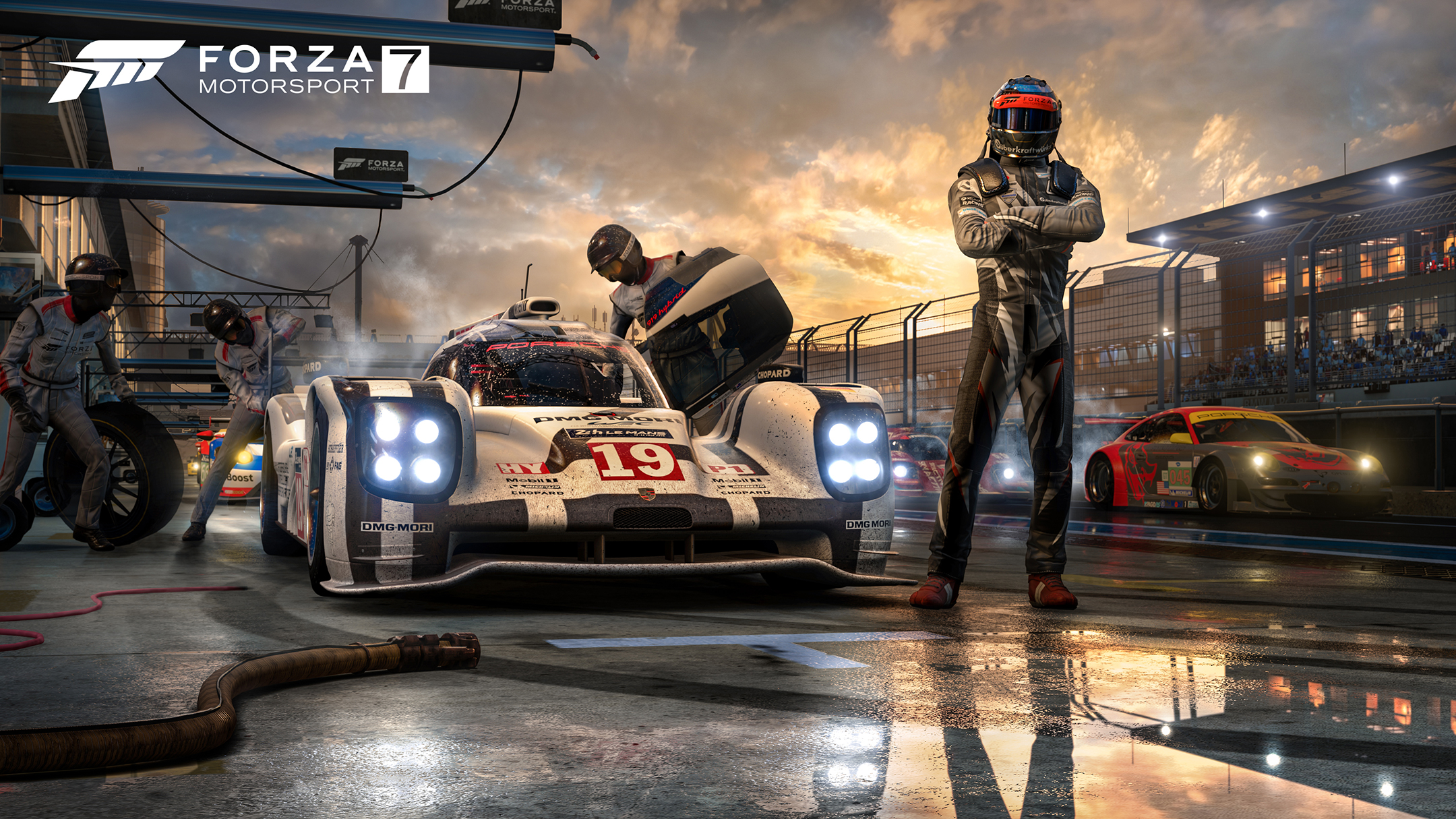 While many of the people at Turn 10 appear well-rested, the mottled hair and the bags under Scott Lee’s eyes are a sign some have definitely lost some sleep over Forza 7. As the lead art director, Lee’s been shepherding one of the game’s most defining features: the addition of customizable characters.

Lee’s small character team has funneled a ton of effort into creating absurd levels of detail for the now more prominent driver, by building out a catalog of racing suits, helmets, gloves, and more. The game has over 300 character designs, and about a week or more of work went into each. There are female and male models, and different “silhouettes,” or body types, for both, each of which took around five weeks to design. 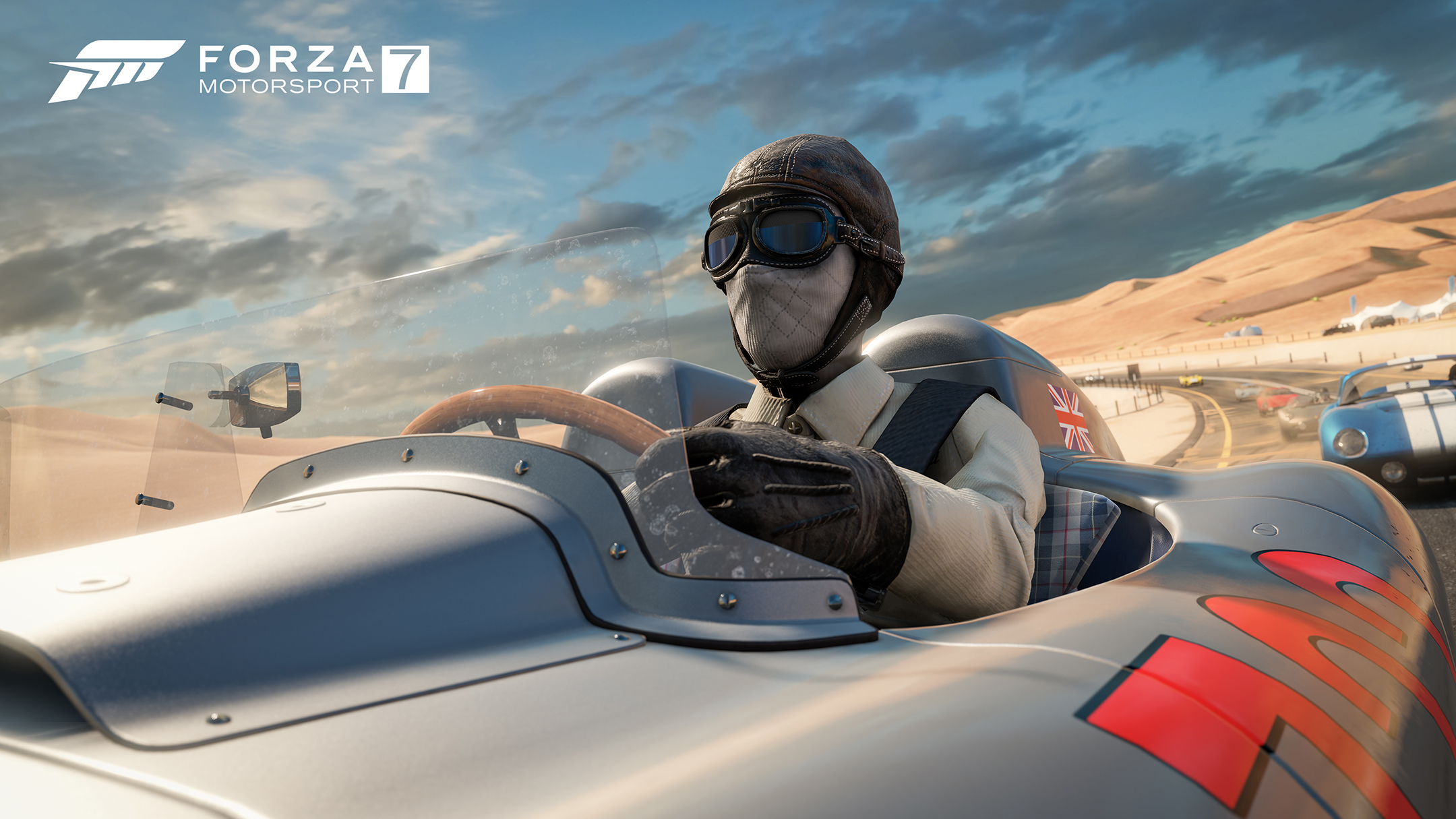 What’s more, each one of the five discrete pieces that makes up a character (the helmet, the suit, etc.) has its own 4K asset. Zoom in on a helmet and you’ll see realistic scuffs and smudges on the visor — and on some special helmets, signatures that look like they were just Sharpie-d on. 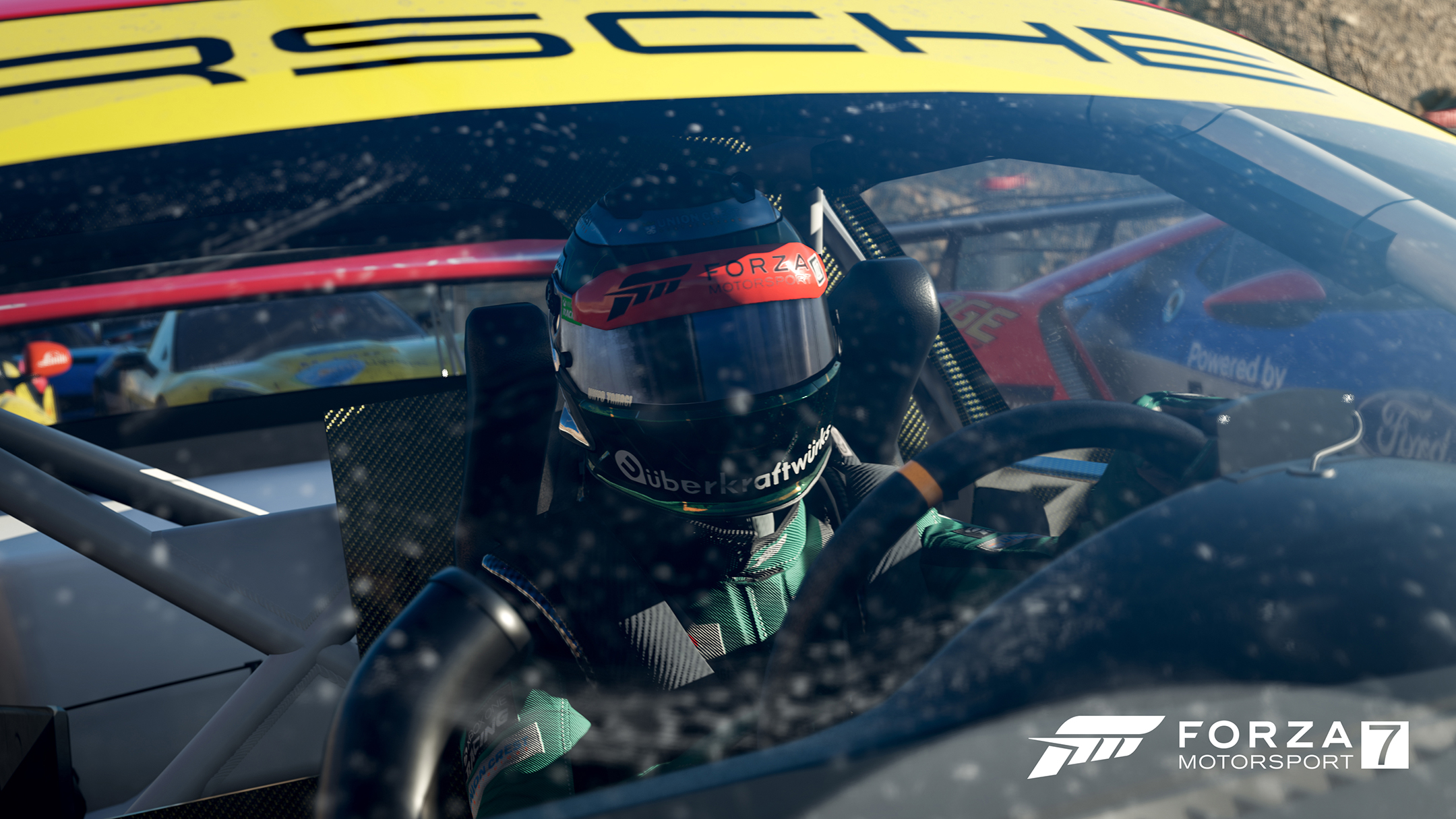 Turn 10 has completely revamped its menu system to put an emphasis on showing off these characters.

#XboxE3 #Forza7 ?Gaming news: "Your character’s look will even now represent you when you show up in friends’ games as drivatars"

Characters will also show up at the ends of races, podium-style, with the winner front and center looking proud, and the third-place finisher turned slightly away from the camera as if they’re already plotting revenge. Your character’s look will even now represent you when you show up in friends’ games as “drivatars,”

Players will be able to choose between everything from real race suits with HANS devices, to old-timey outfits with leather helmets, to some even goofier additions from pop culture (Jokes inside;). With Forza featuring real racing series like IndyCar and NASCAR, you can also expect to see some more iconic suits as well, set to be announced later this summer.

We think audio is critical component of that sense of speed and the kind of violent or exciting nature of racing. At times it’s complete cacophony, tons of noise, rocks hitting the underbody of the car. With race cars in particular, you have no noise insulation, and so it’s just like this like giant resonating metal box.” – Chase Combs, the game’s audio director

Sound is crucial to an immersive experience, and so even Chase Combs, the game’s audio director, has spent the last two years trying to find ways to make Forza 7 grab the attention of your ears as much as your eyes.

But Combs and his team went further than just shifting genres. The music in the game (which you can customize with your own songs) follows you as you hop around the different environments. It also dynamically adapts to those environments.

Go from the main menus to the garage to start tuning one of your cars, and suddenly the music sounds like it’s coming from a radio on the other side of the room. Hop into Forzavista mode, get in the car, and it will muffle. Jump over to the car selection menu, where your character is standing on a stage, and the music sounds like it’s coming through stadium speakers.

Forza Motorsport 7 continues in the footsteps of previous games by providing unprecedented tuning, new Assists and Mods to suit players of all skill levels. And thanks to the Forza Racing Championship esports league, enhanced spectating modes and Mixer integration, everyone can compete. – Team Turn 10 Studios

Forza is more approachable these days. It’s tempting to think of Horizon as the game for non-racers, and Motorsport for the diehards. But the number of driver assists and the freeing up of the campaign has made Motorsport almost as accessible to new players. There will be more of that in Forza Motorsport 7. One particular new option is a “friction assist,” which lets the player turn up or down how severely they’ll be affected by driving off track.

“For some players, if you’ve got licensed cars, and you’ve got realistic graphics, you are as realistic as is required. We keep pushing the physics system further and further and further, and I think it’s understandable that people would go ‘wow, if you do that then you’ve made it inaccessible.’ That’s not been the case.” Or, as Hartman puts it, “realism and punishing don’t have to go together.”

In that way, Turn 10 is redefining realism. Or at the very least, widening the focus of the definition to include the more human aspects of being a racer: the way your body jostles in the seat, the sound and fury that comes with pushing a car to its limits, the silly stickers that can be plastered over a helmet. Forza Motorsport 7 is all about creating the feeling that you’re a great driver — whether or not the computer’s helping.

That’s why Greenawalt thinks pushing for unpolished realism through things like scuffed helmets and garage-speaker sound is so important. Turn 10 has already mastered making glossy racing games. To grow, it has to stop buffing out the dings that make things feel familiar and real.

“What makes cars more relatable is the human hands that made them, and yes, those create imperfections,” he says. “But it’s the imperfections that really bring it to life.”– Dan Greenawalt, Forza franchise Creative Director

Xbox One and Windows 10 exclusive. Experience the danger and beauty of competitive racing at the limit in Forza Motorsport 7. Enjoy gorgeous graphics at 60fps and true 4K resolution in HDR. Collect over 700 Forzavista cars, including the largest assortment of Ferraris, Porsches, and Lamborghinis ever. Master over 30 famous environments with race conditions that change every time you race. Available October 3, 2017 on Xbox One and Windows 10. Coming November 7, 2017 for Xbox One X.

Excerpt & quotes from Forza Motorsport 7 first look: the series refocuses on its drivers via www.theverge.com