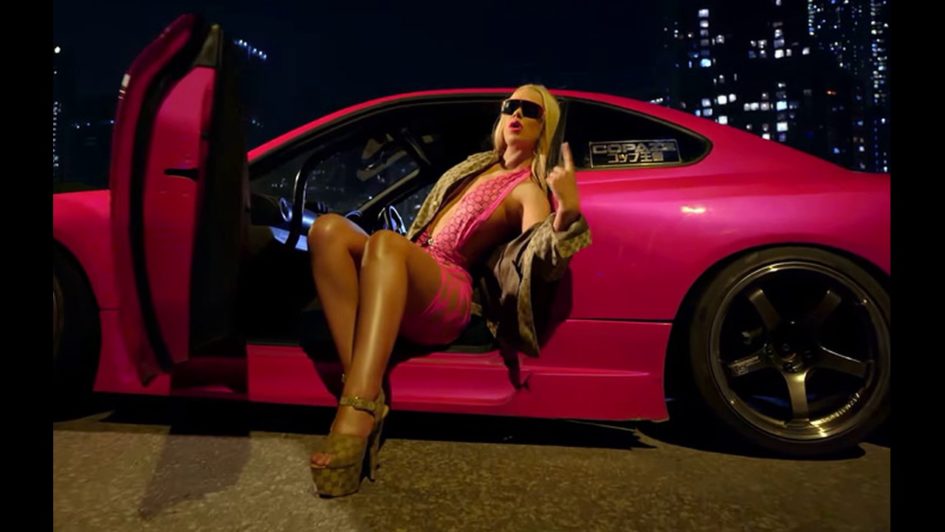 You’ve worked on all of Iggy’s videos since 2011; are there any unique considerations when you’re styling music videos, versus red carpet appearances?

‘With music videos, there are no rules! It’s more about fantasy. Like in the ‘Mo Bounce’ video, for example, she’s wearing pink fishnets and a crazy, hot pink swimsuit. Who would wear that in real life? So it’s fun; it’s things that aren’t realistic. I prefer styling music videos to carpets, actually.’ – Iggy Azalea

Tell us more about that « Mo Bounce » video.
‘We shot it in Hong Kong; Iggy was there to headline a festival, and thought it’d be cool to stay a few extra days and film the video. It totally worked: ‘Mo Bounce’ is such a colorful, wacky, club-y, crazy song, so Hong Kong was perfect, and we just really took it there fashion-wise. We wanted to show the girls in these vibrant, fake designer outfits with their butts bouncing up and down. The glow-in-the-dark part of the video was so fun to shoot, too.’

Would you explain your process? How do you come up with these treatments?
Some people are visual listeners, and they picture imagery in their head. Some people listen to the lyrics. Some people listen more emotionally to see how it makes them feel. I’m definitely a visual listener. When I heard this song, images popped in my head. I knew she was gonna be in Hong Kong—I’ve never been, but I immediately got this kind of cyberfunk, Fast and Furious, gritty feel. And she was on the same tip with it, too. I sent a treatment over, and she sent back a lot of detailed notes and images. To be honest, this was the most collaborative video I’ve ever done with an artist. Iggy was involved the whole time and it was really, really awesome to have that kind of work dynamic. It happens a lot less than you think.

How did you find the little girl dressed in the Ferrari race suit?
Her name is Bobo, and I forget how old she is. She’s really young, though. Like 6, or something. Iggy wanted some kids dancing in the video, and she really, really liked her. She didn’t speak any English and rolled with an entourage. But by the end of the shoot, me and Bobo had this kind of sign language so that we could communicate. She had these set moves that she always did over and over, but towards the end, when she started getting warmed up, she started adding some twists and variations. She goes to dance classes in Hong Kong. She already knows she’s a star. She’s always got her entourage with her. (Laughs.)

Thanks @Spotify for having #MoBounce take over your homepage!! pic.twitter.com/dARiGGl2PC