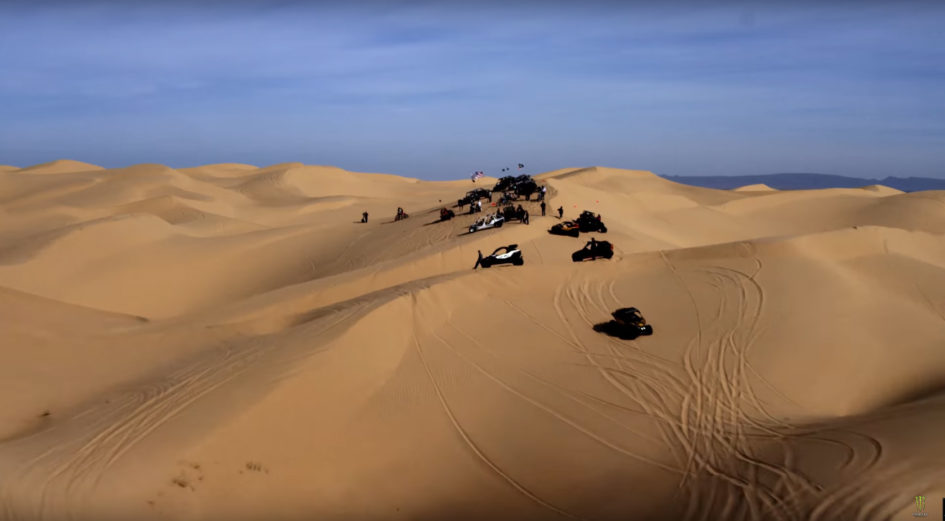 With some new surprises, they brought the most outrageous Monster Energy Off-Road machinery imaginable – The Doonies journeyed back to the Glamis Sand Dunes of California to wreak havoc and go bigger then ever #DOONIES3

As of two years ago, Glamis and the Imperial Sand Dunes have also come to host the social media phenomenon known as the Doonies. Underwritten by Monster Energy and created and directed by one Ash “Dirt Shark” Hodges, the Doonies franchise has not only featured a special brand of off-road mayhem and madness, but generated remarkable social media numbers, as well. In fact, the YouTube video for Doonies 2, produced in the December of 2015, has posted up an incredible 12,286,012 views.

And so with all of this being said, Monster Energy and the Dirt Shark now present Doonies3. A year in the making, in early December the Doonies producers banged the drums and put word out that the annual gathering of the fossil fuel-burning tribes would once again commence at the spiritual and physical homeland of Glamis.

“They told me I could do Doonies 3 if it was going to be better than Doonies 2, so my guys and I ran with the challenge. We immediately put the word out and they came. And we had it all out there for the third iteration of the Doonies. We had the Ball of Steel. We had Kurt Busch’s No. 41 NASCAR Cup car. We had not one, but two 9,000-pound, 12 feet tall, 1,500 horsepower Monster Trucks. We had every conceivable off-road machine produced since the invention of the internal combustion engine. Man, we even had a bunch of Monster Girls with flame throwers. How in the hell do you top that?!” – Dirt Shark

13 minutes and some odd seconds in the making, Doonies3 was forever captured for posterity via a battery of cinematic and still cameras put forth by four different production companies. Toss in two helicopters, an echelon of drones and a Monster army of a crew and you wind up with one hell of a final product.

#Doonies3 has landed!! @wayland_shreds however we don't know. Click through to @monsterenergy's Instagram or YouTube to see all the chaos we caused out in #Glamis this year. 📸: @steviewavy #TemptTakeover #DirtShark

“We’ve been doing the Doonies for three years now. It started out as a camping trip with a few of our elite athletes bringing their toys out to Glamis and the Dirt Shark making a video of it.

Now it has evolved into a massive production with all of our top athletes. It’s like an off-road army out here with Monster bringing out semi-trucks, snowmobiles, helicopters, Monster Trucks, rally cars, Harley-Davidsons and a fleet of 20 dune taxis. This year we even had Jeremy McGrath’s “kool bus” to shuttle everyone through the sand whoops down to the local bar.” – Josh Hill, supercross racer

Have you ever wondered what a #MonsterTruck could do if you let it loose in the #sanddunes? Find out in #Doonies3! Link in our bio…

The original inspiration for the Doonies was the daring young freestyle motocross men and their dune flying machines. Once again, Monster Energy’s world class air force of FMX pilots took to the blue skies above the sprawling Glamis silica.

“The riding out there is probably some of the most intense jumps and riding you’ve ever seen,” explained Josh Hill. “We weren’t setting world records as far as jumping huge distances, but the level of riding going on at Glamis is second to none. There is not a more motivated group of people out there with the intent of finding the craziest, biggest jumps conceivable. I mean we twist the throttle wide open, bang through the gears and get going as fast as the bikes will go to plow through the whooped-out and rutted-out out faces of 200-foot razor back to razor back jumps. When you launch, it’s like you’re jumping two mountains. Seriously, with the jumps we were hitting out there this year, if you brought the majority of top AMA supercross racers out here, I’ll bet you they wouldn’t jump them. It takes a different type of person to huck these jumps. Knowing if you don’t make the distance, you’re definitely going to the hospital. And the only thing you’re getting out of it, is a 5 second video clip and bragging rights. But it’s all worth it sitting around the campfire having a beer with your buds in the desert. »

While the cast and crew and athletes involved in the shooting of Doonies3 gathered around a massive, roaring bonfire after the last day of shooting, legendary freestyle motocross stunt pilot Blake “Bilko” Williams brought up an interesting observation.

“If you look at anything from the Doonies3 video from out here at Glamis on social media or in the video, you’ll be like, ‘Damn, that looks like so much fun!’” said Bilko to the group. “And it is fun. I mean that’s why we’re all here, right?”

2017 is finally here… you know what that means?! #Doonies3 will be launching soon… Are you ready?